In 1858, with the Fraser River Gold Rush, gold fever hit British Columbia. In June of that year, a few wealthy San Francisco merchants arrived at Fort Victoria. They bought property on Johnson Street and Cormorant Street, where Centennial Square is today. There, they set up wood huts for recruited labourers from San Francisco and China. Most were sent to pan for gold in the Fraser River, while merchants stayed behind to set up stores. In 1862, Fort Victoria became the City of Victoria. Its population of 5,000 included 300 Chinese people. The majority resided downtown, with Cormorant Street the centre of Canada’s first Chinatown.

In 1881, the Province of British Columbia joined the national census. The head count listed 693 Chinese residents in Victoria and 485 in New Westminster. They were the largest Chinese settlements in Canada. The City of Vancouver did not yet exist and its predecessor, Granville, was a small outpost. The 1881 census listed 33 Chinese Canadians outside BC. Ten in Toronto, eight in Barrie Town, seven in Montreal, four in Winnipeg, and four in three other cities.

Chinatown’s outward appearance has not drastically changed. The buildings still have their picturesque arcades, narrow alleys, and enclosed courtyards. And Chinatown has the largest intact cluster of Chinese structures in North America.

Victoria was China’s gateway to Canada — and as such, its Chinatown prospered. Many Chinese voluntary associations acquired property in the 1880s–1900s building boom. By the 1910s, Chinatown reached its peak. It covered six blocks, housing most of Victoria’s 3,000 Chinese residents. Cormorant Street and Fisgard Street featured many distinctive brick buildings. A theatre, temples, stores, factories and opium processors, a hospital, cafes, gambling dens, and brothels. Merchants lived above their stores and labourers in wood cabins or lodging houses. Of Chinatown’s alleys and courtyards, Fan Tan Alley was among the most popular because of its upstairs gambling dens.

The Canadian Pacific Railway was completed in 1886. Later that year, its Western terminus, Granville Village, became the City of Vancouver. With a deep harbour and railway access, Vancouver overtook Victoria as Canada’s premier port on the Pacific coast. The 1911 national census listed 3,559 Chinese residents in Vancouver and 3,458 in Victoria. This made Victoria the second largest Chinese settlement in Canada after Vancouver. In 1923, the Chinese Immigration Act prohibited Chinese from entering Canada. This hastened the demographic and economic decline of Victoria’s Chinatown.

After the 1910s, Victoria’s Chinatown remained the second largest for over 40 years. The 1941 national census shows how the Chinese population in Canada had changed. It listed 7,174 in Vancouver, 3,037 in Victoria, 2,325 in Toronto, 1,703 in Montreal, and 719 in Winnipeg. In 1947, the Immigration Act of 1923 was repealed. Chinese immigrants now went to Vancouver, Toronto, Montreal, or Calgary. Through the 20th century, Victoria’s Chinatown population continued to decline. Yet the Chinese population in the city increased until 2001, when it reached about 16,000. As Chinese residents moved out of Chinatown, some historic buildings sat empty. Then, in the 1980s, new life came to Chinatown. Artists and artisans moved into spacious rooms once occupied by clubs, gambling dens, and merchants’ families.

Chinatown’s outward appearance has not drastically changed. The buildings still have their picturesque arcades, narrow alleys, and enclosed courtyards. And Chinatown has the largest intact cluster of Chinese structures in North America. In 1977, BC’s Ministry of Recreation and Conservation identified 30 heritage structures in Chinatown. Built from 1880-1910, they are typical of architectural styles from Western Europe. They feature Italiante facades, Romanesque appearance, or Edwardian Classical. Yet many of the post-1900 Chinatown buildings contain decorative Chinese architectural elements. These include upturned eaves and roof corners. Extended eaves covering the main balcony. Recessed balconies. Oriental motifs such as dragons, phoenixes, and tigers. Oriental colours such as imperial gold, mandarin red, and emerald green. And inscriptions in Chinese characters.

In 1979, Victoria’s City Council introduced a Chinatown rehabilitation program. The City painted and cleaned the buildings, improved sidewalks, and planted ornamentals. It installed Chinese-style lamp posts and bilingual street signs. The City also built an iconic Chinese arch, a care facility, and subsidized housing. On 1983, Her Majesty Queen Elizabeth II and the Duke of Edinburgh visited the district. In 1995, Canada’s Historic Sites and Monuments Board designated it a site of national and architectural significance.

Victoria’s Chinatown is the oldest surviving in Canada. The only one in North America to retain its 19th century townscape. As such, these buildings and their labyrinthine features are of the highest heritage value. They define the unique character of the district, those who lived there, and over a century of history.

About the Author:
Dr. David Chuenyan Lai, Professor Emeritus of Geography, taught for five years at the University of Hong Kong and 35 years at the University of Victoria. His research focus was urban development of Chinatowns and overseas Chinese history. He surveyed over 30 Chinatowns in North America and wrote many publications on Chinatowns in Canada and history of Chinese Canadians. He retired in 2003. The text appearing on our website has been adapted from an essay by Dr. Chuenyan.

Victoria’s Chinatown is the oldest surviving in Canada. The only one in North America to retain its 19th century townscape. As such, these buildings and their labyrinthine features are of the highest heritage value. 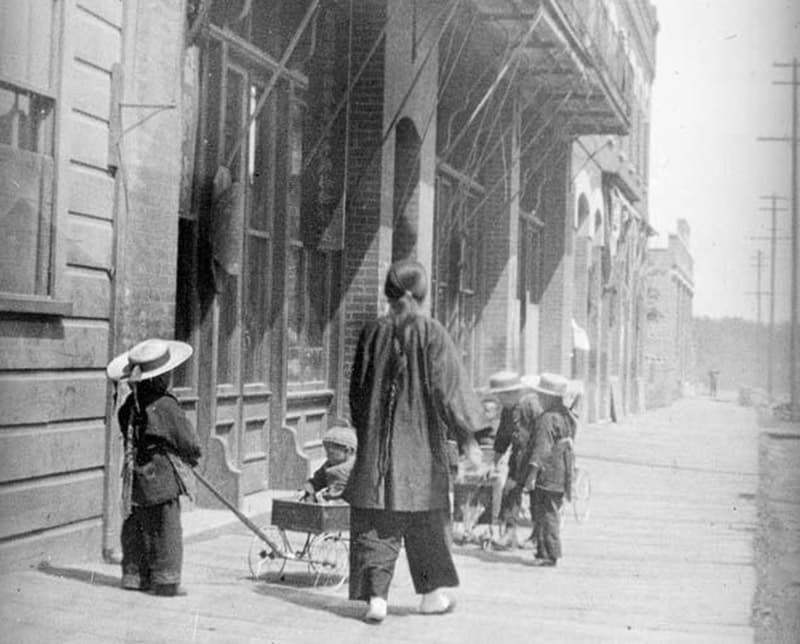