The boycott was a response to the growing Anglo pro-segregation pressure across the West Coast in the 1920s for a more complete separation of the Chinese and white races in public schools. The school protest was a vital struggle against a rising anti-Asian movement in Canada.

The Chinese community accused the school trustees of acting on racial prejudice as they segregated their children in Chinese-only schools. At this time, Indigenous children were being sent to residential schools. They were concerned that if they tolerated the proposed expansion of school segregation to their children, not only their children but all future generations would face diminished opportunities.

The first stirrings of school segregation in Victoria occurred in February 1901 when a few white parents delivered a petition to the school board demanding that the Chinese children attending Rock Bay Elementary be placed in a separate school because they were unclean, untidy, depraved, ill-mannered, and had a demoralizing influence on the white children. Their teachers refuted these allegations and praised the Chinese children for their good behaviour and diligence (The Colonist, Nov. 13, 1902). The School Board did not take action at this time; but, with additional pressure from the Trade and Labour Council, they set up an ad hoc committee to consult the provincial department of education to determine whether they had the power to establish an ungraded school exclusively for the Chinese children. The provincial department of education informed the school board that while it had the power to establish an ungraded school, the school should not be based on creed, colour or nationality (The Colonist, Oct. 09, 1902). In January 1903 the school board placed 15 junior Chinese students in a separate classroom in Rock Bay Elementary followed by 3 rulings:

In 1908, the school board introduced another ruling that required Victoria-born Chinese children or children of naturalized Chinese to pass an English examination before they were permitted to attend public schools. In November of that year, all the Chinese pupils from grade one to grade four were segregated from public schools. The impact of this partial segregation proved to be detrimental to the Chinese children. Lacking an opportunity to practice English with English speaking children, it slowed their progress in English which resulted in awkward and difficult communication with their white classmates when they moved to grade five.

The detrimental effect of segregation was pointed out by Principal Cunningham of the Boys’ Central School in his letter to the school board in 1914:

“…..the moment the principle of segregation is adopted, the children will continue to use Chinese as the medium of thought, and become less able to be assimilated then if they play with the white children as is now the case. Hence, it is no remedy to establish a separate graded school for the Chinese, who would thus never thoroughly learn English or western ways” (The Victoria Times, February 2, 1914).

Then in November 1921, the School Board Trustees of Greater Victoria, led by Board Chair, George Jay, voted to segregate Chinese children from public schools to the end of grade 7. The Chinese-only schools consisted of three sites: Rock Bay Elementary, King’s Road School and the Railway Street School which the Chinese called the Chicken Coop because this school was comprised of two wooden huts relocated from the closed Fernwood School where the children shared the grounds with chickens. At this time, a majority of children, including Chinese students, left school to work at age 14, thus, the new policy effectively excluded them from interacting with other Canadian children. 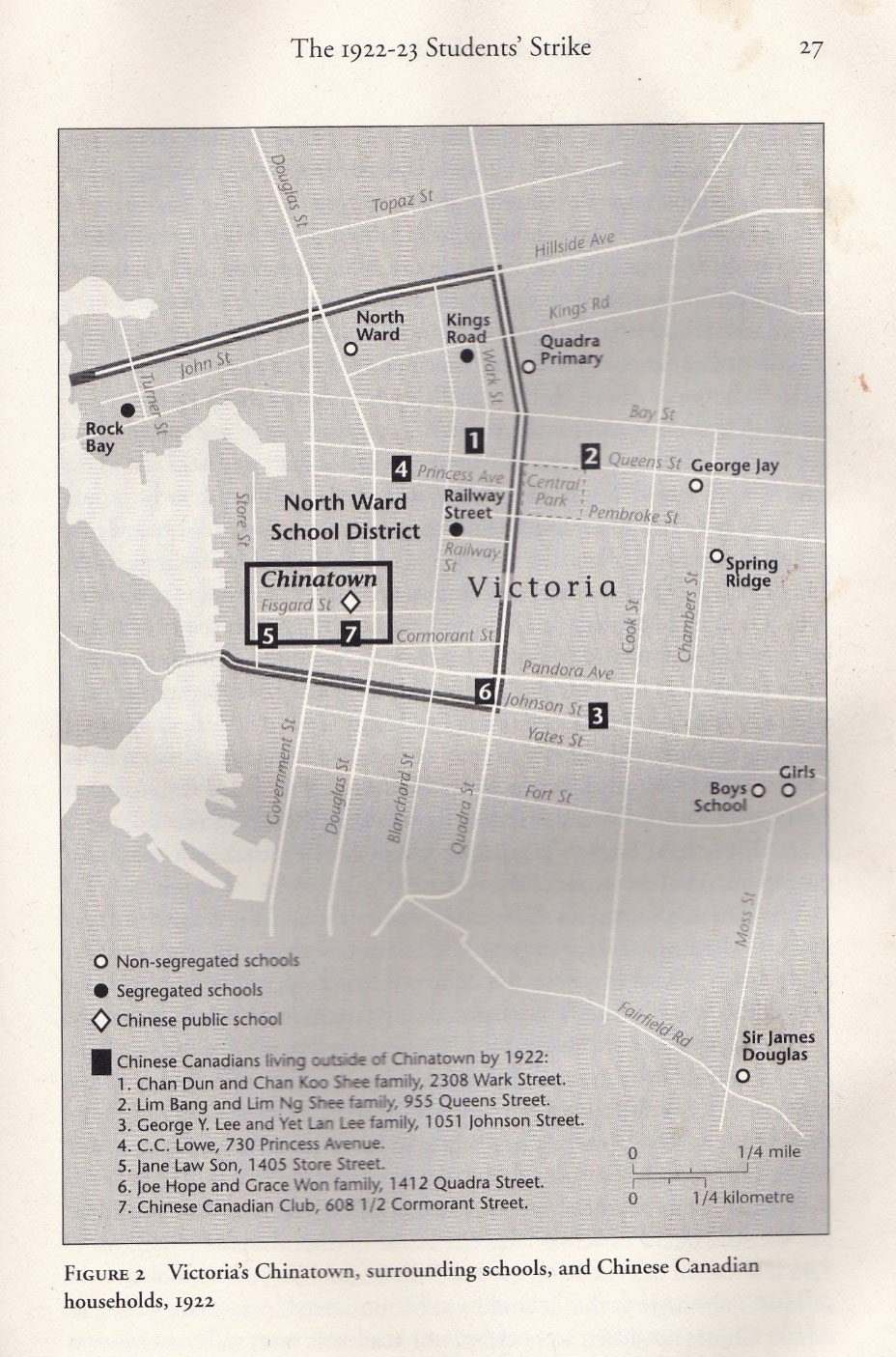 School Segregation, Anti-Racism, and the Making of Chinese Canadians

The Chinese parents had accepted the partial segregation because they believed that it was better to have the children in a segregated school than to have them barred completely from attending public schools.  For the Chinese community, English language schooling was important.  They felt that the children, the majority of those segregated were locally born, would not be able to integrate fully into Canadian society without access to English language schools. The Chinese community believed that as taxpayers, their children were entitled to equality of educational opportunity especially as the children were here to stay and to become Canadian citizens.

On September 05, 1922, the first day of school of a new school year, all Chinese students were called out of their schools. They were to be marched to the Kings Road School by their principals. As they walked towards the school, one of the senior boys gave a prearranged signal to the students. In response, all the students dispersed and the principals were left alone on the route. This remarkable act marked the beginning of the anti-segregation movement of 1922-23 when the Chinese in Victoria boycotted public schools to protest against the expansion of racial segregation.

Three organizations organized the boycott: The Chinese Consolidated Benevolent Association (CCBA), the Chinese Chamber of Commerce, and the Chinese Canadian Club, the latter were locally born Chinese youth. The Chinese Community in Victoria came together from families, merchants, single bachelors, rich and poor, clan and county associations. These three organizations utilized their networks and raised money throughout British Columbia and Canada to support the boycott and to fund a court challenge. They also appealed to their Anglo allies in Canada and submitted a petition to Victoria’s school board. As disenfranchised residents, they were legally powerless and could only appeal on moral and diplomatic grounds. They a developed a resistance plan that included the following:

There were many allies who tried to mediate: Harry Hastings, Alexander Won Cumyow (founder of CCBA in 1884) and one of the oldest locally born non-Indigenous people in the province, W. E. Perry, a Presbyterian missionary and Neville Lascelles-Ward, head of Anglican missions in British Columbia.

After one year, the Chinese protest stopped the advance of school segregation. The school board returned to the pre-boycott segregation policy. Chinese children living in the North Ward District had to attend a separate Chinese-only school in Rock Bay for the first four years of their elementary education. After Rock Bay School was demolished in the late 1920s, all of the Chinese students were transferred to the Railway Street School or as the Chinese called it, the Chicken Coop. This is where the Chinese students attended until after the Second World War. One small concession was that Chinese children who succeeded in rapidly learning English could be promoted earlier to integrated schools at the discretion of their teachers and principals.

The Chinese fought for their children to have equal rights to educational opportunity and to be able to go to school with other children. Although the boycott did not advance their fight, they held ground. It represented a stand against British Columbia’s anti-Asian movement, they stood up to what had to be done because they believed that if they permitted school segregation to be expanded then it would affect all the generations of Chinese that followed.

On September 05, 2022, the Victoria Chinatown Museum Society invites everyone to walk the route of those earlier Chinese students. This is an opportunity to acknowledge the students who had the courage to defy their principals and who acted on their conviction. On this day, we will walk together supported by our communities and our allies to stand up for equality and the right to education as any other person. Those of us, of Chinese descent, who were born and raised in Victoria, who went to school in Greater Victoria were able to attend public schools because of those who preceded us. Their organized and multi-faceted campaign of resistance put the spotlight on the racism and their courageous actions made, at least, one step in the ongoing struggle for equal citizenship.